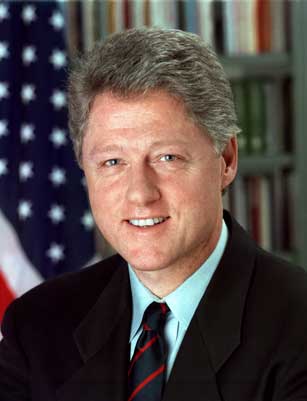 Bill Clinton was born in 1946 in Hope, Arkansas. He grew up with his mother, Virginia Blythe, and his mother’s parents, because his father died in a car crash before he was born. His mother completed nursing school while Bill was young, so he was often in the care of his grandparents. They made sure he attended school and had a good education. In 1950, Bill’s mother moved back to AR and married Roger Clinton, a car salesperson. Although his family was not extremely religious, Bill attended a Baptist church every Sunday and learned to play the jazz saxophone. Due to his drinking problem, Roger Clinton and Virginia Blythe divorced in 1962.

Bill attended Hot Springs High School for his freshman and sophomore years of high school, and when he was a junior, attended Arkansas Boys State. He was the AR representative to the American Legion’s Boys Nation, and due to this he was asked to meet President Kennedy at the Rose Garden in the White House.

When he graduated high school in 1964, Clinton went on to attend Georgetown University. He studied international affairs and became very involved with politics at the university level. He won the elections for class president his freshman and sophomore year, but by his junior year, many of his classmates felt he was too involved in politics, and so he lost the race. Upon his college graduation, he was awarded a two year scholarship to attend Oxford University in London. However, shortly after arriving in Great Britain, he was drafted and had to return to Arkansas. After applying to the University of Arkansas Law School’s ROTC program, he returned to Oxford to complete the two years he was awarded there. He did resubmit his name to the draft, but by the time he did, he had a high enough lottery number to ensure he wouldn’t be drafted for Vietnam. After Oxford, Clinton came back to the US and attended Yale Law School, where he met his future wife, Hillary Rodham. They graduated together in 1973 and were married in 1975. In 1980, their daughter, Chelsea, was born.

Clinton became the governor of Arkansas in 1978, at the age of 32, making him one of the youngest governors in history. Because of his inexperience, he made several mistakes that made him relatively unpopular with certain groups of people. After his first two years as governor, Clinton lost the seat to his Republican opponent. However, in 1982, after overtly acknowledging his mistakes, Clinton was reelected as governor. During his second round as governor, Clinton raised the education standards significantly by creating competency based tests for teachers. He also supported affirmative action, which helped African Americans gain access to jobs and schools that they would not have had previously. He worked hard to get people receiving welfare back to work, and remained interested in what the public had to say about what they wanted to see change in the government.

In 1992, Clinton won the Democratic primaries and chose Senator Al Gore, of Tennessee, to be his running mate. George Bush Sr was growing increasingly disliked by the public, because he had promised not to raise taxes, and later broke that promise. Therefore, on November 3, 1992, Clinton was elected 42nd President of the United States. Clinton’s first few years in office were not entirely successful. He had endorsed a health care bill that would have provided universal health coverage to the US. However, Congress denied the bill, and it became a political eyesore. Due in part to this failure, both houses of Congress were taken by the Republicans in 1994. Before the next election, Clinton signed the Violent Crime Control and Law Enforcement Act into effect; he also raised minimum wage. Therefore, he was reelected in 1996, defeating Bob Dole in the presidential race for candidacy. Today, Clinton’s presidency is seen as a time of economic prosperity. Unemployment and inflation rates decreased, and homeownership increased.