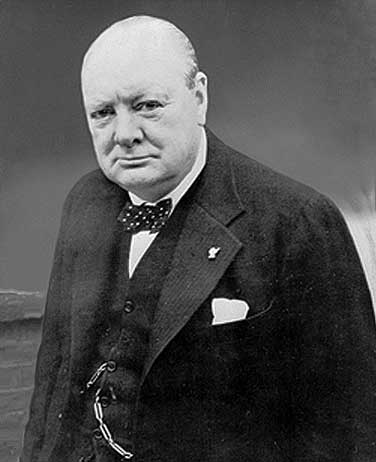 Born on November 30, 1874, Winston Churchill was the son of Randolph Churchill and Jennie Jerome. Lord Randolph Churchill acted as the Chancellor of the Exchequer (who takes care of financial matters) in England; Jennie was the daughter of an American businessperson. For a brief period of his childhood, Churchill lived in Dublin, where his grandfather was appointed Viceroy. Churchill had a speech impediment for most of his childhood that he worked hard to overcome. Eventually, he became a very successful orator. This was not predicted by his school experience, however, as he often received bad marks. However, once he was accepted into the Royal Military College, he began to seriously apply himself and graduated in the top 15% of his class.

A family of his own

In 1904, Churchill met Clementine Hozier at an elite function. Four years later, they met once again at a dinner party. They began dating, and in August of 1908, Churchill proposed to Clementine. Approximately one month later, they were married at St. Margaret’s Church, in Westminster. Winston and Clementine had five children together (Diana, Randolph, Sarah, Marigold, and Mary); Marigold died as a toddler of septicaemia.

Churchill attended the Royal Military College, and chose to be in the calvary. In 1895, he became a Second Lieutenant in the 4th Queen’s Own Hussars. He then made his way to Cuba to observe and write about Cuban guerrilla warfare. After Cuba, he was moved to India, and narrowly missed becoming involved in the Greco-Turkish War. In 1898 he was transferred to Egypt, quickly returned to Britain, and began writing “The River War,” a two volume work telling of the reacquisition of Sudan. On May 5, 1899, Churchill resigned from the British Army. Much later, in 1941, he was appointed Regimental Colonel of the 4th Hussars. After World War II, he became Colonel in Chief, which is a position usually saved specifically for royalty.

After winning the seat of Oldham in Parliament in 1900, Churchill went on a tour throughout Britain and the US, during which he raised a substantial amount of money for his campaigning purposes. Throughout the following years, he held several different seats in Parliament. He helped several major changes pass through Parliament, such as the Budget League’s new taxes on the wealthy to allow for welfare systems and programs to be set up. This act, along with several other events, made the talk of Churchill’s actions very controversial. Although he identified with the conservative party in Parliament, he was receiving criticism from both sides at one point.

Churchill and World War I

Churchill was in Antwerp on October 5, 1914. The government wanted to evacuate, but did not. Instead, Antwerp collapsed on October 10, losing 2500 men. Churchill managed to get naval funding to finance the development of the tank. At the time, everyone thought it was a waste of money; within a decade, the tank would eventually be considered a tactical win. In 1915, he resigned from the government and rejoined the army.

Churchill and World War II - "Winston is back"

After a tumultuous career in politics, Churchill was once again appointed First Lord of the Admiralty on September 3, 1939. His position proved to be excessively highly publicized and criticized. In 1940, after the Chamberlain’s resignation due to others’ fear he would not properly execute the war, Churchill was appointed Prime Minister. Churchill refused any type of agreement or alliance with Germany, which paved the way for Allied attacks later on. He realized the importance of an alliance with the United States and quickly secured their support. Roosevelt provided Churchill and Britain with food and arms in return for little to no money. Roosevelt explained to Congress that, in a way, these actions were providing a defense for the US.

As WWII came to an end and Germany was defeated, Churchill proudly announced a victory to his people. You can listen to the Sinews of Peace Address at Westminster College.