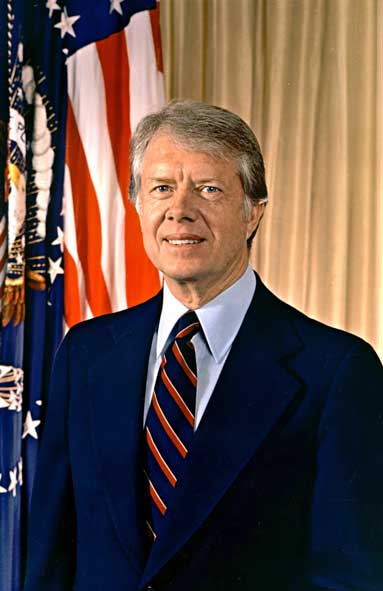 James Earl (aka Jimmy) Carter, Jr., was born on October 1, 1924, in Plains, Georgia. He was the oldest of four children born to James Earl Carter, Sr., and Bessie Lillian Gordy. He was also the first president to be born in a hospital. Carter was a good student, and thoroughly enjoyed reading. He was the first man on his father’s side of the family to graduate high school (1941), and he applied to the United States Naval Academy and graduated with a Bachelors of Science degree. He ranked 59th out of 820 students. He married Rosalynn Smith on July 7, 1946.

After graduation, Carter worked on surface ships and diesel-electric submarines in both the Atlantic and Pacific fleets. He wanted to be Chief of Naval Operations; however, before he was able to achieve this goal, he had to return to his family’s home in Georgia at the news of his father’s death. Carter had to take over the family business to keep it afloat; he was discharged from the Navy on October 9, 1953.

Once back in Georgia and running his father’s business, Carter began to serve on various local boards and committees. He served two terms on the Georgia Senate, representing the 14th district. He considered running for the House of Representatives; however, he dropped out when his opponent, Howard Callaway, decided to run for governor. Carter also ran for governor, but lost the democratic primary. Re-entering as a 3rd party candidate, he did receive enough votes to throw the election into a runoff election. Segregationist Lester Maddox was nominated on the democratic platform, and was elected as governor of Georgia. Carter planned to run for governor again in the 1970 election.

In the 1970 election, Carter was up against former governor Carl Sanders. Carter was not a segregationist, and he voted to have African American families allowed into the Plains Baptist Church. Despite this action, Carter did have some tendencies that aligned with segregationists - for example, he was opposed to busing and in favor of private schools. However, in his speeches, he claimed that the “time for racial discrimination is over” and that African Americans are members of society, who should not be denied health care, education, and so on. Carter won the election and was inaugurated on January 12, 1971. He served one term, as that was all that was legal for him to serve at the time.

President of the United States

In 1976, with remnants of the Watergate Scandal still in the air, Carter entered the Democratic primaries in the race for the presidency. His appeal came from his distance from Washington DC; people considered him separate from the corruption that existed in Washington at the time. Although he entered the race as the least-well-known candidate, his popularity shot up after several months of campaigning. He won the election with 50.1% of the popular vote.

During his presidency, Carter focused his efforts on fixing the “problems” of the US he inherited. He said that the US energy crisis of the 70s was the “moral equivalent of war,” and he encouraged every American to focus on energy conservation. To practice what he preached, he had solar panels put in at the White House, and he wore sweaters while at home to save energy used on running the heat. Other accomplishments included the deregulation of the beer industry, which meant the sale of malt, hops, and yeast to homebrewers was legal for the first time since Prohibition. He boycotted the 1980 Summer Olympics because of the Soviet invasion of Afghanistan the previous year. Carter also deregulated the airlines, which meant the government would no longer control airfare, routes, and so on.

Despite his efforts, in 1980 President Carter was defeated by Ronald Reagan in the 1980 election for President.

After his presidency, Carter went back to Georgia to find his family’s business in shambles. He had left the business in a blind trust, which had clearly been mismanaged, leaving him in over one million dollars of debt. Although his presidency is generally considered a failure, he is considered a good person - a “better man than … president,” writes The Independent. Throughout the rest of his retirement, Carter has worked with various public interest groups in order to advance human rights. He received the Nobel Peace Prize for the work done through and with The Carter Center.