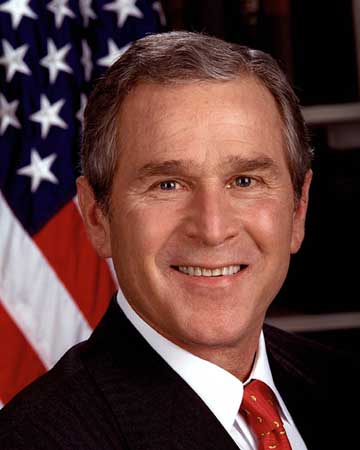 George W. Bush was born in New Haven, Connecticut, on July 6, 1946. The child of George H. W. Bush and Barbara Pierce Bush, George W. Bush was the oldest of six children. Bush’s father moved the family to Midland, Texas when Bush was two years old. There, George Bush Sr made his living in the oil industry. When the Bush family moved to Houston in 1961, they sent George Bush Jr to boarding school in Andover, Massachusetts. He was a good athlete and an average student. Bush attended Yale University and earned his Bachelor’s of Arts degree in History. He joined the Texas Air National Guard in 1968; however, he was suspended from flying in 1972 because he did not take a physical exam, and was honorably discharged in 1974. In the fall of 1973, he began working on his MBA at Harvard Business School. After earning his MBA, he returned to Midland and got into the oil business.

In 1977, Bush met Laura Welch, a librarian and teacher, and the two hit it off. They dated for three months, and Bush proposed to Laura. They were married on November 5, 1977. Bush credits his ability to settle down to Laura, who encouraged him to join the United Methodist Church. She also supported him giving up alcohol and maintaining a safer, more manageable lifestyle. In 1981, they celebrated the births of their twin daughters, Jenna and Barbara.

In 1994, Bush ran for governor of Texas. He defeated incumbent Governor Ann Richards after pledging that he would sign a bill she had vetoed - to carry concealed weapons. Bush advocated educational reform, welfare reform, and programs to reduce crime in Texas. He won with 53.5% of the votes. He cut taxes and increased funding for all types of education, including education on the risks of drug and alcohol abuse. He also advocated renewable energy and helped Texas become one of the main producers of wind powered electricity.

Bush faced a number of other nominees for the Republican ticket. He made sure to endorse himself as a centrist, meaning he appealed to “both” parties. He stood for tax cuts and improvements in education, as well as helping minorities; however, he also had more traditionally conservative views on things like gun control. Once he won the Republican ticket, he faced former Vice President Al Gore for the presidency. The election was very close; although Gore won the popular election by 543,895 votes, Bush won in the state of Florida, which gave him enough electoral votes to win.

Bush had the majority of the Republican party’s support in the 2004 election. Senator John Kerry, the Democratic nominee, criticized how Bush was handling the war in Iraq; however, Bush pointed out Kerry’s inconsistencies and proved to America that Kerry did not have what it would take to successfully end the War on Terror.

During his first term, Bush approved a $1.35 trillion tax cut in an effort to stimulate the economy. However, many said that this cut still favored the wealthy. He increased government spending after the terrorist attacks on 9/11/2001. In 2003, when job growth was still not increasing to his liking, President Bush instituted another tax cut program. During Bush’s terms as president, the unemployment rate wavered. The median household income per year dropped; however, the “after-tax” median household income increased. In 2008, the national debt had increased more than 100% from 2000, from $5.6 trillion to $11.3 trillion.

In terms of education, the most memorable bill President Bush passed was the No Child Left Behind Act, which targeted students of lower socioeconomic classes and aimed to bridge the gap between advantaged and disadvantaged students. One of the programs goals was to create more options for parents of students of lower socioeconomic classes, so that students were never “stuck” in a program that was not meeting their needs. Many critics say that NCLB’s focus on high stakes testing and quantitative results (test scores), as opposed to qualitative results (critical thinking skills of students) makes the initiative misguided.

During Bush’s second term, he expanded Medicare drug benefits for the elderly. However, he vetoed the State Children’s Health Insurance Program, which had been added by the Democrats and approved by Congress. It would have given healthcare to six to 10 million children, using money from cigarette tax. However, Bush claimed that this was a step towards socialized health care that he did not want to take.

On September 11, 2001, terrorists crashed planes into the World Trade Center, the Pentagon, and a field in Pennsylvania (after passengers attempted to stop the terrorists). It became known that the terrorist group Al Qaeda was behind the attacks. President Bush declared a worldwide War on Terror, and promised that those people behind the attacks would meet a similar fate. The Taliban government did not release the location of Osama bin Laden, the leader of the attacks, and thus the war began. The following year, President Bush declared preemptive war on Iraq, due to the belief that Iraq was housing nuclear weapons of mass destruction. It wasn’t until 2008 that Bush began to truly withdraw troops from Iraq; in the 2008 campaign, one of the Democrats’ main points of interest was getting the rest of the troops out of the Middle East.

At the end of his second term in 2009, President Bush returned to his home in Texas. He and his wife bought a home in Preston Hollow. Bush published his memoir, Decision Points, in 2010, where he claimed that his biggest accomplishment was “keeping the country safe amid a real danger.” He was a part of the Clinton-Bush Haiti Fund, which raised money for the victims of the 2010 Haiti earthquake.