The words in red are possessive, meaning they indicate that something belongs to someone.

Each word above in blue is a contraction, which means a pronoun and verb put together. The apostrophe takes the place of a missing letter.

Let’s look at them one set at a time.

its = belonging to it

Grab the umbrella by its handle because it's raining. 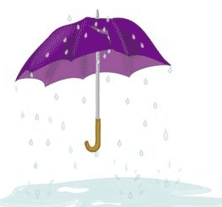 its handle - the handle belongs to the umbrella

it's raining = it is raining

Their, There, and They're

Their = belonging to them

They're going to move their chairs overe there.

Your = belonging to you

You're going to need yourcoat.

greeting in a letter or

I was with my dear friend when we saw a deer in the woods.

I had ice cream for dessert, but it melted because I was in the hot desert.

Tip: Dessert has two "S"'s because it is twice as sweet - and everyone wants more dessert.

You said "no" when I asked if you still live in Kansas. Now I know that you moved to Georgia.

A minor is too young to sign a legal contract. Minor has an o because oh, you are not old enough yet!

No one was hurt in the car accident. It was just a minor fender bender.

peer = someone who is an equal (of the same age, grade level or similar job status)

pier = a structure built partly on land, partly on water for boats to dock

A fisherman took a few of his peers (other fishermen) to the pier on the lake. Pier has an i because it is used by people who want to go fishing.

The Constitution says that we have the right to write letters complaining to our government officials.
Unless you are left-handed, you probably write with your right hand.
Write starts with a w because it means to put words on paper.

If not now, then when?
I used to be a good runner, but I was much younger then.
First you defrost the meat, and then you turn the oven on.
If you are getting cold, then put on a sweater.

My shirt is a lighter shade of yellow than Mike's shirt.
I would rather walk in the park than go to the gym.

Mom took two baskets of fruit to the food bank, and I did too! However, some of the grapes fell out of one basket because it had too many grapes.

I stubbed my toe, and now it hurts.

My parents gave me a present. It was a new car with a bow.
However I crashed it, and now it needs a tow.

Notice that bow and tow rhyme, and after the first letter, they are spelled the same.

Due to this unpredictable weather, I don't know whether I should carry an umbrella.

For each of the following questions, write each answer in the box provided. Answer choices are in [brackets]. Questions will have more than one answer, so write your answers in the order that they appear, separated with a comma (,).

The correct answer is: "It's hard to say whether the crashed car will need a tow."

The correct answer is: "Please only take two cookies because three is too many."

I went [to, too, two] the [peer, pier] for some fishing with some [dear, deer] friends of mine.

The correct answer is: "I went to the pier for some fishing with dear friends of mine."

The correct answer is: "In the woods, I saw some deer and one had spots on its back legs."

The [miners, minors] came home from work with coal dust on [there, their, they’re] clothes.

The correct answer is: "The miners came home from work with coal dust on their clothes."

[There, Their, They’re] in the [desert, dessert] was a rabbit hopping around a cactus.

The correct answer is: "There in the desert was a rabbit hopping around a cactus."

The Constitution says if you are accused of a crime, you have the [right, write] to a jury of your [peers, piers].

The correct answer is: "The Constitution says if you are accused of a crime, you have the right to a jury of your peers."

The correct answer is: "Dear Uncle Joe, I'm sorry but no, I can't come to your party."

The correct answer is: "That cake you're eating looks good. I want dessert, too!"

The correct answer is: "I can hear them, so I know that they're close!"

He can’t vote this year because he will still be a [miner, minor] on Election Day.

The correct answer is: "He can't vote this year because he will still be a minor on Election Day."

I hurt my [right, write] hand, so I had to [right, write] the letter with my left hand. However, my hand should heal soon because the injury was [miner, minor].

The correct answer is: "I hurt my right hand, so I had to write the letter with my left hand. However, my hand should heal soon because the injury was minor."

I have an uncle who says his [toe, tow] itches right before rain or other bad [weather, whether], but I think he’s crazy.

The correct answer is: "I have an uncle who says his toe itches right before rain or other bad weather, but I think he's crazy."

The correct answer is: "If you would rather go outside than watch tv, then go soon."

Tell them to first put [there, their, they’re] shoes on and [than, then] they can go outside.

The correct answer is: "Tell them to first put their shoes on and then they can go outside."

{their, then|then, their}
Sign up for free to access more English resources like . Wyzant Resources features blogs, videos, lessons, and more about English and over 250 other subjects. Stop struggling and start learning today with thousands of free resources!
<< Prev (Effect or Affect)
Next (Lay or Lie) >>
EnglishGrammarHomonymsHomophones
Mark favorite