Neptune, god of the Sea (eighth planet from the Sun). 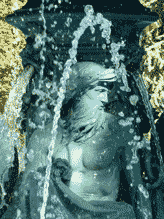 Appropriately named, Neptune is an ocean god for an ocean-colored planet. You can see his symbol, the trident, below.

Astronomers use Neptune’s fishing spear, the trident, for the planetary symbol. Neptune is the Roman equivalent of the Greek Poseidon, god of the sea.

Mythological History of Neptune, or Poseidon

Neptune, or in Greek mythology, Poseidon, is one of the twelve gods of Olympus. He is known as God of the Sea. He also causes earthquakes ("earth-shaker"), and is known as the "tamer of horses." For this reason, horses often were used to indicate Poseidon. Poseidon was the son of Kronos and Rhea. In most accounts, he is swallowed by Kronos and later saved by Zeus. According to the Iliad, the world was split between Zeus, Hades, and Poseidon; Zeus received the heavens, Hades received the underworld, and Poseidon received the sea.

Poseidon fathered many children, including Theseus, Pelias and Neleus, and possibly Pegasus. He had sexual relations with Amphitrite, Tyro, Amymone, Cleito, Demeter, and Medusa. He was worshiped in Athens (second only to Athena, goddess of Athens), and was the most important god in Corinth. Poseidon rode on a chariot pulled by horses and lived on a palace on the ocean floor.

Neptune had to wait until modern times to have a planet named in his honor. In the early 1800’s, astronomers carefully observed the planet Uranus in order to determine its exact orbit around the sun. They found to their surprise, that its actual movement lagged a bit behind what their calculations were predicting. In 1820, French astronomer Alexis Bouvard began making tables predicting the movements of Jupiter, Saturn, and Uranus. The tables seemed to work for Jupiter and Saturn, but he found it impossible to predict where Uranus should be. Some believed there might be another planet beyond Uranus whose gravitational pull was slowing it slightly. An English astronomer, John Couch Adams, and a French astronomer, Urbain J. J. Leverrier, unknown to each other, both calculated where such a planet must be to account for the effect on Uranus. They both came out with the same results: Leverrier was the first to announce his results and on September 23, 1846, Johann Galle, in Berlin, confirmed the existence of a new planet, less than one degree from the predicted position and, behold, there was the eighth planet. It was named Neptune, not for any particular reason, but because Neptune was one important god who did not have a planet named in his honor. Neptune is another gas giant, similar in size and structure to Uranus. Although discovered in 1846, the eighth planet did not return to the position where scientists first saw it until 2011. Neptune orbits slowly because it is far from the Sun. In size and color, Neptune seems to be a twin to Uranus, but Neptune does not spin on its side; its axis tilts only a little more than that of Earth. The orbits of two moons, Triton and Nereid, crisscross the equator diagonally. Between Triton, the largest satellite, and the planet itself, six small, recently discovered moons also orbit. The planet is about seventeen times more massive than Earth. Astronomers now regard Neptune and Uranus as twin planets, somewhat alike in size, density, mass, and rotation.