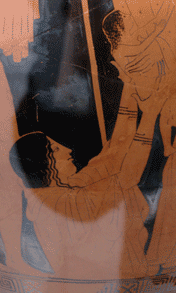 As the earth mother, her symbol is the Greek sign for sphaira, sphere.

The Greeks called her Gaia while the Romans referred to her as Gaea, Terra, and Tellus. She is considered a primordial deity; that is, she is one of the first beings to exist. The Greeks had a theory that the earth was the center of the universe and that the Sun, Moon, and planets revolved around her (a geocentric universe). According to Greek mythology, in the beginning the Earth was not full of loveliness, as it is now. No trees waved their leafy branches; no flowers blossomed in the valleys; no grass grew on the plains; no birds flew through the air. All was silent, bare, and motionless. Eros, the first to be aware of these deficiencies, seized his life-giving arrows and pierced the cold Earth. Immediately the brown surface was covered with rich green; birds of many colors flew through the foliage of the new-born forest trees; animals of all kinds roamed over the grassy plains; and swift-darting fishes swam in the clear streams. All was now life, joy, and motion. Gaia, roused from her apathy, admired all that had been done to beautify her; and, wanting to crown and complete the work so well begun, she created Uranus (Sky). This version of the creation of the Earth, although one of many current with the Greeks and Romans, is considered the one most generally adopted.

Her first-born Earth produc’d,
Of like immensity, the starry Heaven;
That he might sheltering compass her around
On every side.
-Hesiod

Gaia had multiple children with Uranus after she brought him forth; some of them included the Cyclopes, Brontes, Steropes, Arges, and Briareos, who had a hundred arms and fifty heads. Uranus was castrated by Cronus, using a sickle Gaia had made. From Uranus's flowing excrements, Gaia created the Erinyes, Nymphs, and Giants. Then, from Uranus's testicles, which had been thrown into the sea, came Aphrodite, goddess of Love and Beauty. Some say Gaia was the original Oracle at Delphi, and that she gave her powers to another entity; this story is disputed.

The Greeks were convinced that their land occupied the central position on the Earth, and that Mount Olympus, the legendary abode of their gods, was placed in the exact center.

Scientific facts about the Earth:

Earth and its satellite, the Moon, follow a slightly oval-shaped path around the Sun. This causes Earth at one point to travel 2 500 000 km farther from the Sun than its average distance. Despite this variance, Earth stays within a region of tolerance called the “ecosphere.” In this safety zone, that roughly extends from the orbit of Venus to that of Mars, temperatures never get too high nor too low to support her varied forms of life. If her orbit changed and carried her closer to the Sun, she would roast and life as it now exists would be destroyed. Swinging too far away from the Sun, she would freeze into a ball of ice. Earth’s tilt causes the seasons. When the North Pole slants toward the Sun, the Northern Hemisphere has summer while the Southern Hemisphere has winter. Although earth is then farthest from the Sun, the sunlight is less slanted and lasts longer. Winter comes to the Northern Hemisphere when the North Pole tilts away from the Sun and the Southern Hemisphere has its summer. A magnetic field acts as Earth’s shield against the solar wind, creating a region called the magnetosphere. The wind carries deadly, electrically charged particles as it streams outward from the Sun. Some particles are trapped in the Van Allen Belts, two bands that circle Earth. Earth has one natural satellite, the Moon. The Moon is an airless world with a diameter almost one-fourth that of Earth. In the Solar System, only Pluto, with its companion Charon, has a satellite so close to its own size. The Earth-Moon system is considered a double planet.

Want to learn more about Earth's Moon? Read on!