In the movie Catch Me if You Can, Frank Abagnale (played by Leo DiCaprio) charms his way through life, impersonating a series of prestigious professionals–doctor, lawyer, airline pilot.

Now, maybe you’ve done this yourself on a smaller scale. There’s certainly a time and place for “fake it till you make it!”

When it comes to GRE quant, however, charm simply won’t cut it, and there are lots of common mistakes made when prepping for the test. While you can learn some creative test-taking strategies, the bottom line is there are several formulas that you just plain have to know.

The good news is that the GRE is not as formula-heavy as say, the SAT. You can get a very solid score by knowing the main GRE Math Formulas that come up over and over again on the Quantitative Reasoning Section. So what we’re going to do here is review the 12 most important formulas that you need to know. At the end, we’ll throw in a few more you’ll need if you’re looking for a particularly high score (160+).

1. Area of a rectangle (or square)

This one’s about as simple as they come. Let’s use the picture of the rectangle below, which has a length of “l” and width of “w”: 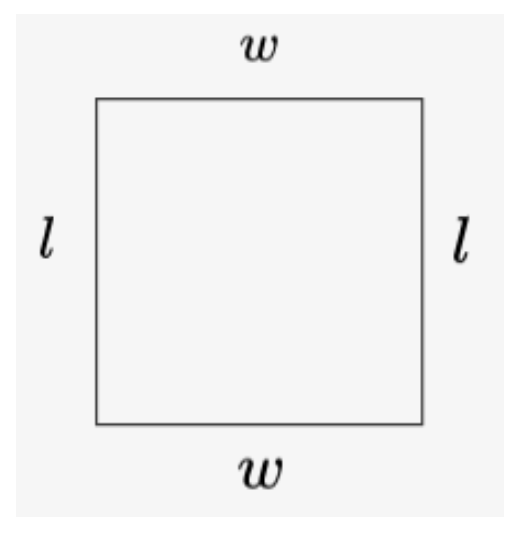 To find the area, just multiply the length by the width. Which means our formula is…

You’ll notice that we’re excluding some of the more “exotic” quadrilaterals here (e.g parallelogram, trapezoid, rhombus). There are formulas for the areas of these shapes, and you can feel free to look them up. However, you can always break any polygon you come across into rectangles and/or triangles, and then find the sum of the areas of each individual piece (see trapezoid below)! 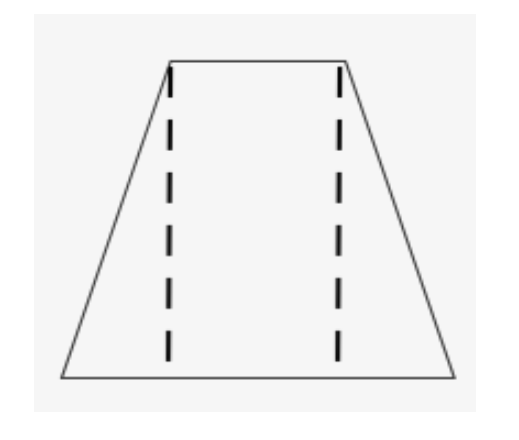 2. Perimeter (of any polygon)

3. Area of a triangle

Here’s one you might remember from high school. The formula for the area of a triangle is one-half the base times the height:

Sounds easy enough, until you ask, “which side is the base? And what exactly is the height?”

The answer to the first question is very straightforward: Any side of the triangle can be used as a base. So in the picture below, why don’t we say that the base of triangle XYZ is side XZ. 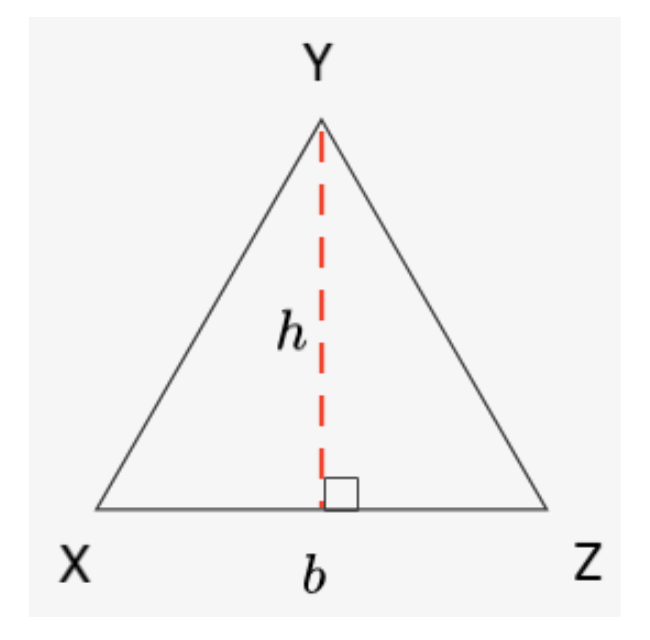 To find the height, go to the point that’s NOT on the base (in this case, Y), then draw a line down to create a right angle with the base (XZ). That’s your height. Let’s look at the same picture, but add in some numbers. 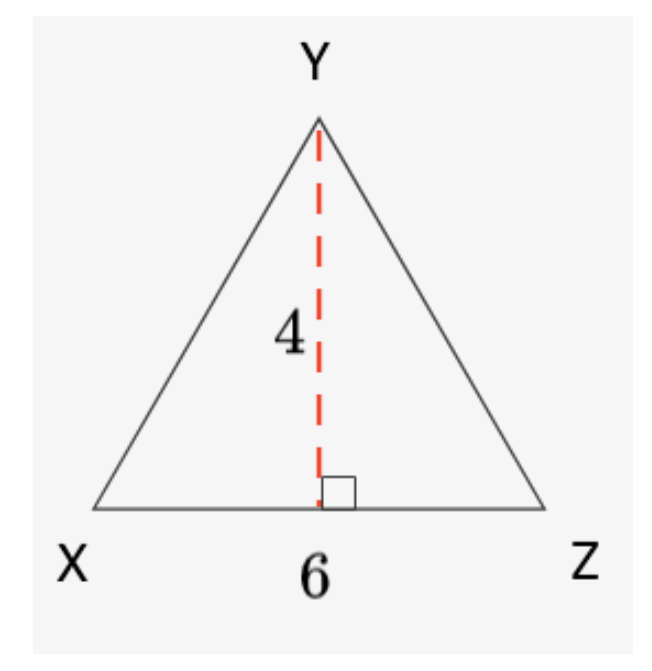 Obviously, this is a rather simple example. When you come across more difficult material, however, it’s extremely helpful to have a tutor who can walk you through problems step by step!

An oldie but a goodie. This is a formula you learned back in 7th or 8th grade, and it’s probably still bouncing around in your noggin.

Have a look at the right triangle below, with sides A, B, and C. 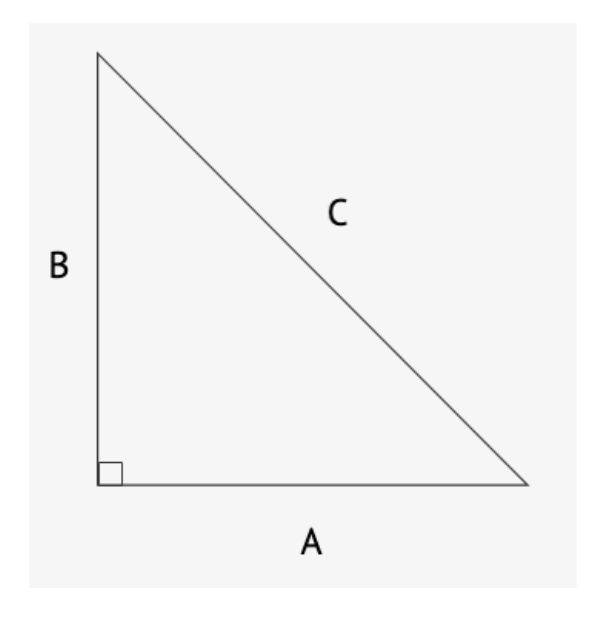 The two shorter sides, A and B, are known as the “legs” of the triangle, while the longest side, C, is the “hypotenuse.” These three sides in a right triangle will always be in the relationship…

Note: this does not apply to all triangles–just to right triangles

You have to admit, it is catchy. Old Pythagoras really knew how to write a zinger.

To calculate the area of the circle, find the radius (distance from the center to the edge in the picture below), square it, and multiply it by π (approximately 3.14). 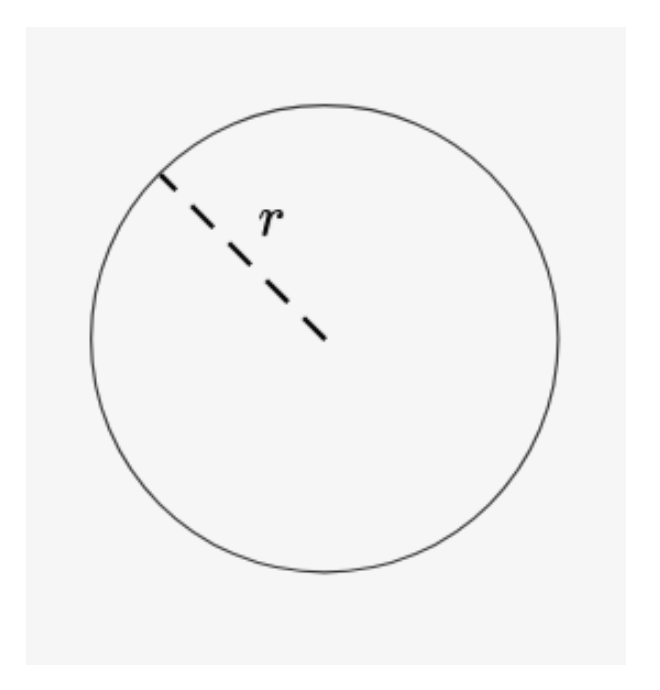 This means that our formula is:

It’s pretty easy to confuse this with the formula for circumference (below). To avoid doing that, think about this…what kind of units do you use in everyday life to measure area? You’d talk about the square footage of a house, or the square mileage of a town, right? So just remember that the formula with a square in it is area!

6. Circumference of a circle

The circumference of a circle is the distance all the way around the edge. To calculate it, multiply the radius by 2π.

If you’ve ever been skiing, you know there’s a pretty significant difference between bunny slopes and black diamonds. Namely, the black diamonds are much steeper.

Well, to put an exact number on the “steepness” of a line on a graph, we use slope. Suppose we have two points, pictured on the graph below: 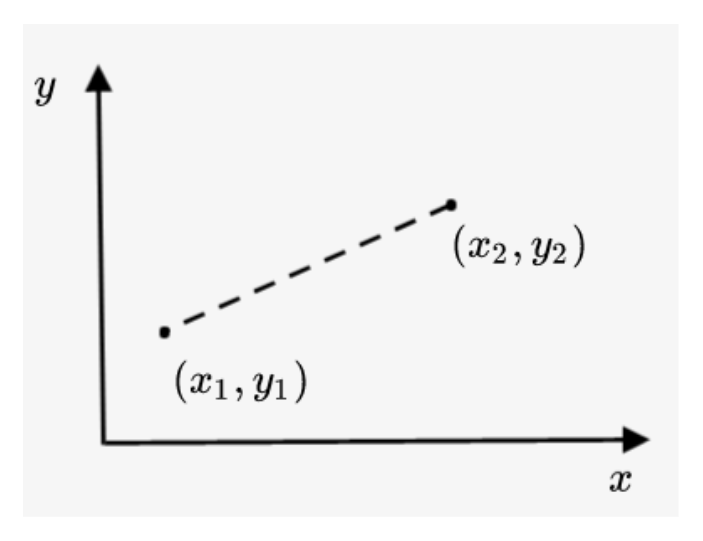 To calculate the slope of the line between these two points, you’ll need the following formula:

However, if keeping all of those letters and numbers straight seems a little daunting, there’s an easier (and more alliterative) way to remember it:

Simply find how high you “rise,” vertically from one point to another, and divide by how far you “run” horizontally. Let’s check this out with a specific example below. 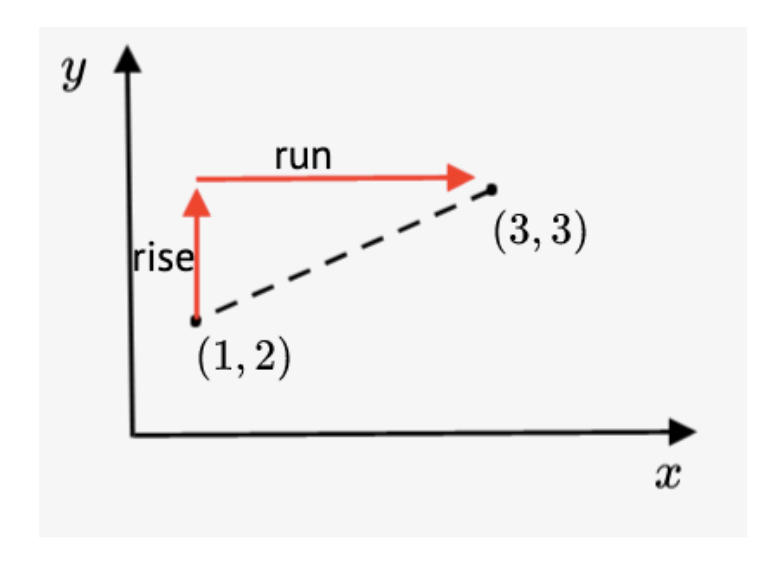 Many of the GRE’s coordinate geometry questions deal with linear functions (that’s just a fancy way of saying “lines”).

Any line in the coordinate plane can be represented with the formula:

In this formula, “m” represents the slope of the line, while b represents the “y-intercept.” Brings you right back to high school algebra class, doesn’t it? Let’s take a walk down memory lane with a specific example.

If we’re given the line y = 3x + 2, we immediately recognize that it matches the pattern above. In this case, the 3 is in the m-spot, so we can say that the slope of the line is 3 (or 3/1). Meanwhile, the b-value is 2, so our y-intercept is 2. What does that mean? Simply that the line hits the y-axis at 2. Thus, if we sketch this line, we’ll get the image below: 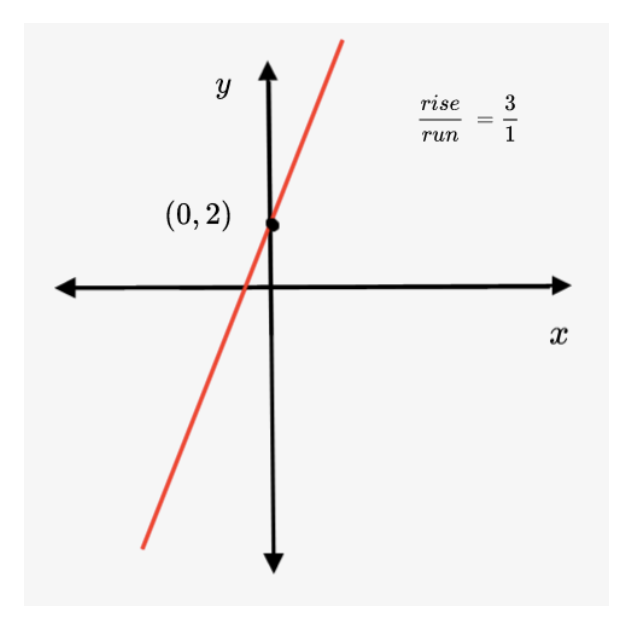 To calculate the mean or average (both terms mean the same thing), you want to add up all the terms and divide by the number of terms. This means that the formula for finding the mean/average is:

All that said, many mean/average questions on the GRE—especially those in the quantitative comparison format—can often just be eyeballed.

For instance, suppose you were told that Class A had an average test score of 50, Class B had an average test score of 100, and the average of everyone in the two classes is 90. Which class has more students? Well, clearly Class B: If the two classes had an equal number of students, the overall average would have been right in the middle (75). But because it’s closer to Class B, we can assume that B has more people.

Colliding trains and high speed chases…Speed problems are by far the most action-packed questions the GRE has to offer. To succeed on them, though, you’ll need this basic formula:

If you’re taking the GRE, you’re almost certainly an adult (unless this is some sort of Doogie Howser situation). As such, you probably work with percentages on a pretty regular basis. So if you have a system in your head that works for you, keep it. If not, here’s the formula to calculate the percent change between a new value and an old value.

You might be asked to calculate the volume of a solid, such as the box in the figure below: 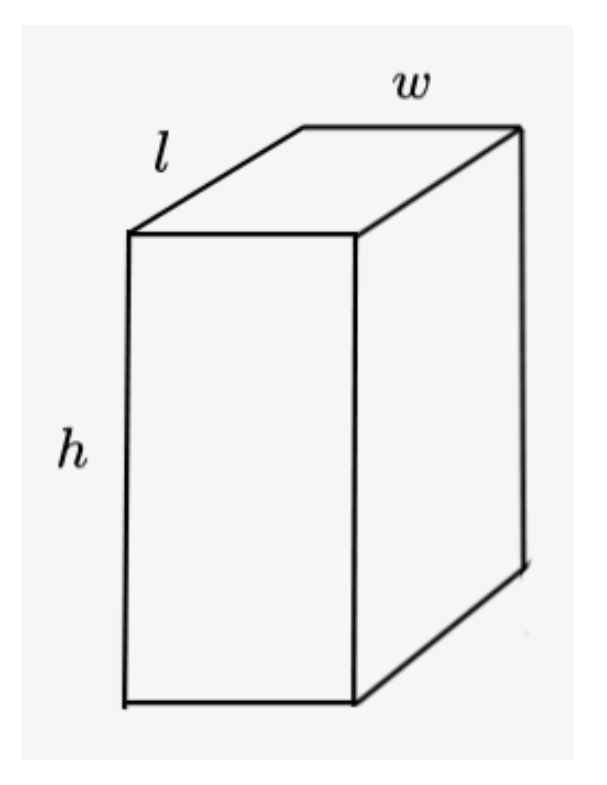 If you are, the simplest formula to remember is…

It’s true that you could remember the volume of a box as “length x width x height.” But the reason the above formula is nice is because it applies to other 3-D figures you might come across, like cylinders. In the case of a cylinder, the base is a circle. So you’d find the area of the circle, then multiply it by the height.

Note: You will not have to know how to calculate the volume of a pyramid, sphere, or cone. If those shapes pop up, you’ll be given the formula.

Of course, the above list is not exhaustive, but those are the formulas you’ll need if you’re looking to get a decent score. If you’re aiming even higher though, here are a few more:

If you have n items, and you want to count the number of ways to arrange r of them, use the following formula:

If you have n items, and you want to count the number of ways to group r of them (that is, order does not matter), use the following formula:

The generic format for a quadratic expression is:

To calculate the sum of interior angles in a polygon with n sides, use the following formula:

To calculate the amount of money in a compound interest account that starts with P dollars, use the following formula (where r is the interest rate and t is the number of periods):

How to study for the GRE

It’s one thing to have these formulas memorized–it’s quite another to be able to apply them. In order to make them stick, it’s important to take GRE practice tests. By taking practice tests as part of your GRE math practice, you’ll not only be able to solidify the formulas, but you’ll also gain an understanding of the format and structure of the test. Your GRE quantitative score is determined by your performance on two quant sections. But here’s the kicker–the test adapts based on how you’re doing! If you do very well in the first section, the second one becomes harder. That’s not something you can simulate with a book of practice problems! Thus, it’s critical to include practice exams into your GRE prep.

Thanks for checking out this formula cheat sheet for the GRE Quantitative Reasoning section! As you continue to study, be sure to ask your GRE tutor any questions that arise!

Born and raised in the California Bay Area, Andrew has a weird affinity for standardized tests. His “favorite” is definitely the GRE, on which he scored a 170V/169Q. Feel free to reach out with any questions on his tutor profile! Request Tutoring From Andrew

The 12 Fundamental Principles of Design, Explained

Samantha Fein December 1, 2020
Arrangement of visual imagery within the picture plane is essential for artists and designers to consider when creating their artwork. Effective use of design can…
Read More

How to Objectively Critique Your Own Work: Learning from Feedback as a Creator

Myriah Strivelli November 30, 2020
An essential component of growing as an artist involves examining your work and soliciting other artists’ feedback. Each is equally important, and I suggest doing…
Read More