“Do you need to learn French to go on a short vacation or business trip?”

Since I am an American who speaks French at an advanced level, people ask me this question pretty often. My answer? You don’t need to become an expert, but a few common French phrases will make your trip a memorable one.

It is true that many French people speak and understand English well, especially in cities that attract large numbers of foreign tourists. However, visiting France without any knowledge of the language limits your experience. Not only that, but it may give locals the idea that you don’t respect them or their culture.

First things first, though, so here’s a quick primer that will help you understand how to say and read French words.

To get the most use from this guide, you’ll need to know how to properly pronounce the new words you’ll learn. French is notorious for pronunciation rules that frustrate English speakers. Silent letters are everywhere, there are accent marks, and those R’s are from the throat, but subtle. But with some practice, they will not seem as scary.

È – Accent Grave.Usually appears above the letter E, but can appear above any vowel. Pronounced like the E in the English word get. Examples: problème, deuxième

Ç – Cedille.Only appears under the letter C. Makes the sound soft, like an S as opposed to hard like a K. Examples: français, garçon

Ö – Trema.Can appear over any vowel. Makes the second vowel in a pair voiced. It is often used with names and places. Examples: coïncidence, Zoë

Ô – Circonflexe.Can appear over any vowel. It does not significantly alter the pronunciation. There is a movement to remove it from the language, but it’s still important to know what it is and where you’ll find it. Examples: être, hôtel

The evolution of the French language is a wild ride that a lot of consonant sounds did not make it to the end of. These include H at the beginning of words and D, G, M, N, P, S, X , and Z at the end of words. There are some exceptions for names and words that originated in other languages.

Another notable exception is a device called the liason. If a word that ends in a consonant is followed immediately by a word that starts with a vowel, the consonant is pronounced. Practice it and it will begin to make sense.

The difference between formal and informal speech is very important in French, especially in any phrase that includes the pronoun “you.” Use the formal vous for adult strangers and authority figures. Use the informal tu for friends, family, and children.

If you are not sure whether or not you are on a “tu” basis with someone, it does not hurt to ask Peut-je vous tutoyer?, which roughly translates to “Can I call you “tu”?”

Everything in French is gendered. Nouns are either masculine or feminine and the rest of the sentence has to be consistent. If the subject of a sentence is masculine, you have to use masculine articles for it like un (a, one) or le (the). If a noun is feminine, the equivalents are une and la, respectively.

In sentences that include “my [object]”, “your [object]”, “his [object]”, or “her [object]” use the article that matches the gender of the object, not the sentence. For example, “She talks with her professor” would be “Elle parle avec son professeur,” because the word professor is masculine, even though the subject is a woman.

You probably noticed some E’s in parenthesis at the end of some of the vocabulary words. If you are a woman, the word is spelled with the E. If you are a man, it is not. If you are non-binary, do what you consider most appropriate; there is no current consensus on how non-binary people should navigate French grammatical gender.

This guide won’t make you fluent, but it will walk you through topics like greetings, polite phrases, and ordering dinner, and also help you become familiar with lots of other useful French words and phrases for tourists.

You’ll mostly stick to using bonjour (good day) and bonsoir (good evening) for strangers, and salut (hi) for people you know well. Remember: how you say “hello” in French depends on your relationship with the other person, and even the social setting. At the end of this article, you’ll find a section to help you with French etiquette.

Au revoir (goodbye) or au bientôt (see you soon) work for most goodbyes. Other ways to bid someone farewell in French are adieu and a tout à l’heure (see you later).

You’ll meet a lot of new and interesting people on your trip, so familiarize yourself with how to introduce yourself. Hello, how are you is a popular, friendly way to say hello to a stranger: Bonjour, comment allez-vous? Ça va works too, if you’re friends or family.

S’il vous plaît is the formal way to say, “Please,” in French. You can switch to s’il te plaît – please, informal – with those you know more closely.

To thank someone in French, you’ll use merci, of course. You’re likely to hear de rien (you’re welcome) in reply, or maybe pas de problème (no problem), so learn how to use those, as well.

On a trip, everyone eventually encounters a problem and could use a helping hand. If you want to ask a local for help, you might first ask parlez-vous Anglais (do you speak English)? To continue in French because they don’t, or because you feel confident asking for help in their native language from reading this guide, just politely ask pouvez-vous m’aider (can you help me)? If you hear oui, you’re on the right track. 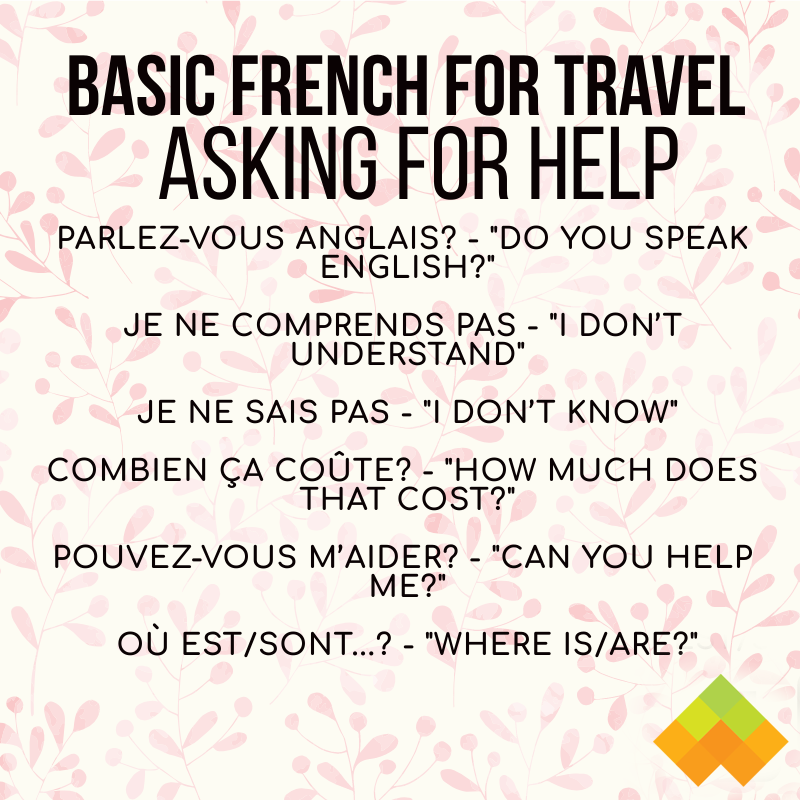 Getting around as a tourist requires asking for information! There are a few ways to phrase a question in French. You could keep the sentence as-is and change your inflection, or add est-ce que to the beginning (which signals that your phrase is a question).

Try to remember who (qui), what (qoui), where (où), when (quand), why (pourquoi), how (comment) in French, all of which will be useful in lots of situations, even if you’re not entirely sure how to fluently articulate your request in your new second language.

Qu’est-ce que c’est? is a very useful French phrase to have in your repertoire when sightseeing or shopping – “What’s that?” If you’re hoping to buy a souvenir, and can’t find a price, you can ask combien to find out.

It’s travel; things happen! The most basic way to say “I’m sorry” in French is je suis désolé. Use pardon when you bump into someone or need to squeeze right past them (Midwesterners, think of it like “ope”). Excusez moi – excuse me – is appropriate when you’re exiting a crowded train or are trying to get a waiter’s attention. 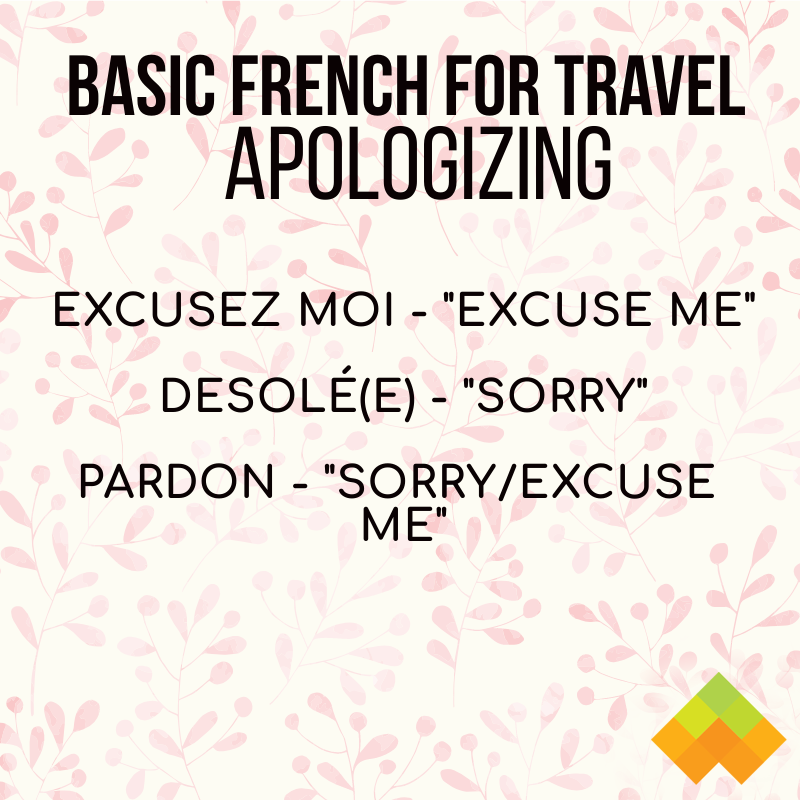 If you don’t check out the restaurants and order some wine, did you even go to France? This short French vocabulary list will make eating all that fabulous food less intimidating. Keep in mind that the norms of eating out are different in France than in the United States. For example, asking for changes to a meal is frowned upon and viewed as disrespectful to the chef. Waitstaff are hands-off and far less upbeat, as their customer service culture does not emphasize making customers happy at any cost. On a related note, tipping is not customary. 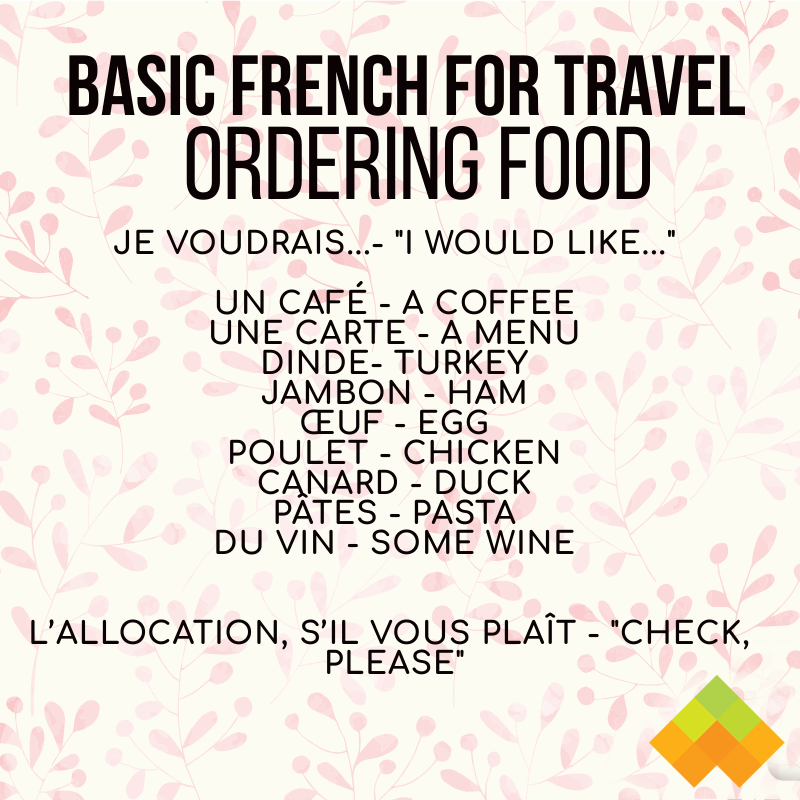 No one wants to be That American Tourist. Here are some tips that will make you less likely to stick out.

If you want to prepare as well as you can, try booking a French tutor. That way, you can get lessons that are tailored to your goals that include French grammar rules. Contrary to popular belief, one-on-one tutoring is not just for students who want to do better in their classes. Many tutors have specific curriculum for travel preparation. Look for words like tourism, travel preparation, adult education, and adult learning in their descriptions. For the best results, start a month or two before your trip. Have some goals in mind when you schedule your first session. The more specific you can get, the better.

Our indispensable guide to learning French contains everything you need to know to begin learning one of the most-spoken languages in the world.

If you would rather learn in a classroom setting, see if your city has an Alliance Francaise. It is a great place to take lessons and go to events for French learners. Many cities also have social groups for language learners that you can find on Facebook groups or Meetup.

There are also tons of great language learning apps. They work best as a supplement to your lessons, not as your only source of education. Duolingo makes learning a game. Babbel is a great way to practice real-life situations.

Listening to the news in slow French is a great way to practice listening comprehension.

Watching French films is a great way to get in the mood before your trip. Browse this list of French films available on Netflix for inspiration. It is also a good idea to pack a phrasebook, since you may not be able to rely on your phone. Last, but not least – try practicing French past tense, present tense and future tense. Most importantly, have fun! Bon voyage!

Lauren Harsh is a French tutor and content writer based in Chicago. They have a dual BA in International Studies and French and Francophone Studies from the University of Michigan and ten years of French experience. Request Tutoring From Lauren

How to Expertly Prepare for GED Social Studies

Jonathan Reidenouer, M.Ed. September 25, 2020
Planning on getting your GED? Chances are you are concerned about the Reasoning Through Language Arts and the Mathematical Reasoning sections. That’s what your high…
Read More

Joshua Kraus September 24, 2020
With campuses closed throughout the country, an unprecedented number of students have begun taking their college classes online. While many of these students are struggling…
Read More

Erin Davila September 23, 2020
It’s no coincidence that the mere thought of taking a high school or college chemistry class often produces anxiety and angst among students and parents.…
Read More